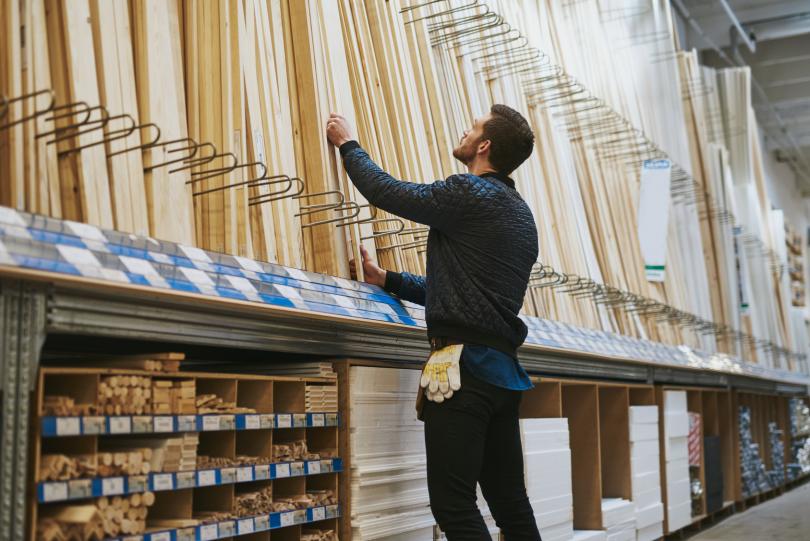 I have been married to a handyman now, coming up on 7 years.

These years have been full of craziness.

Being married to a handyman is no small feat, and I’d like to let you in on what it’s like.

This is especially important for the new bride of a handyman. If you know one, shoot her this info. 😉

Let’s get the not-so-great things out of the way first.

Negatives of being married to a handyman

You may never be able to throw something away again

Seriously, your handyman can fix near anything.

Computer slow, dying from a virus, program not working right? Whatever.

Mine tore apart a straight iron I had in the garbage, with it’s 1,839 teeny parts, bent something here, soldered something there, put it all back together right, fixed it. Twice. I got years more out of that stupid iron. 😛

You may never see him in a suit, sans your wedding and funerals

Your man, who most likely lives in t-shirts and jeans, is fun loving and laid-back.

Yes, he looks good in his jeans and cowboy boots. And I mean, good.

But, just like a woman in an elegant gown, there’s something about a man dressed up. And your man can dress up. You’ve witnessed it. He was the sexiest man in the world in the tux he waited at the end of the aisle for you in.

But he hates dressing up. And he will, most likely, fight you tooth and nail to keep from EVER getting dressed up.

Other than our wedding, his sisters wedding, and the funerals of his grandparents, I have not seen my hubby in a suit.

Most days I’m OK with it. You will be too, once you’re married to a handyman. 😉

His time may be limited as everyone wants him for something

This is probably the biggest negative I’ve had to experience.

Not only is my man good at (all the) things, but he has a big heart and loves to offer his services to help others.

Most times I can appreciate his willingness to be a blessing to others, but there are times I’m jealous of his time. Our first 2.5 years of being parents to our two littles, he has had to spend almost every free moment devoted to something other than parenting/being with us.

* This is definitely something you want to discuss before you get married to a handyman. If you are both in agreement about time and how much you each need together, giving him up for a while shouldn’t cause hurt feelings or resentment. * 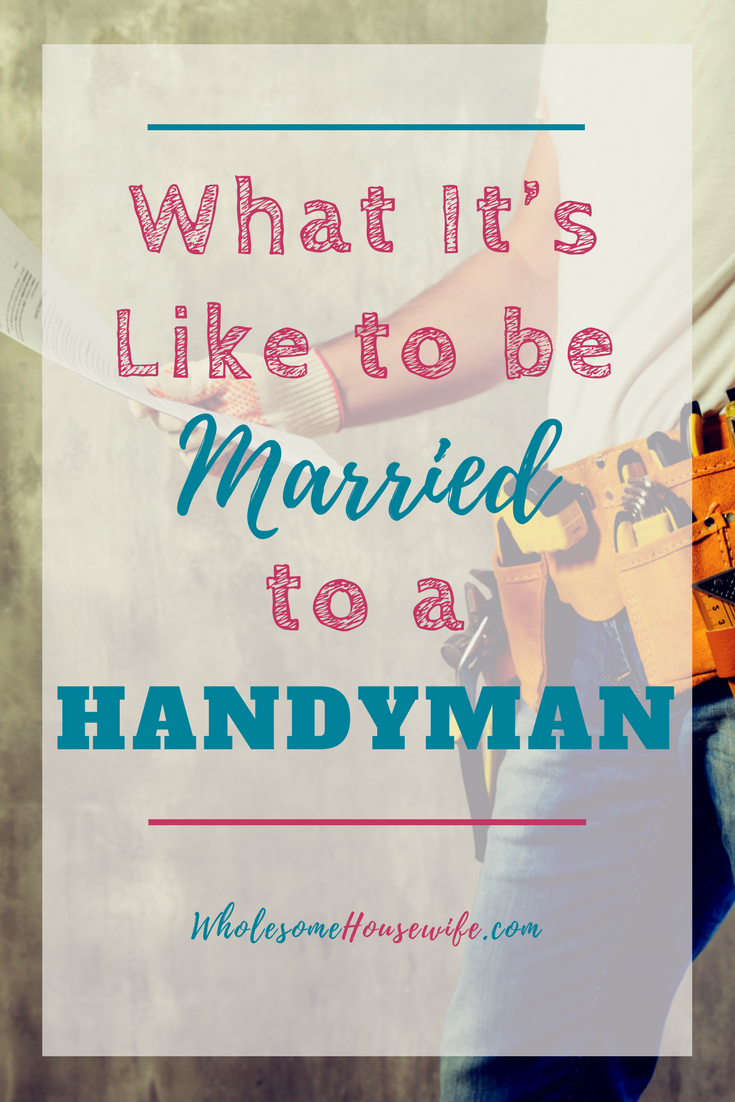 Positives of being married to a handyman

He will save your family sooooooooooooo much money

If I could remember each thing that has happened to us over the last almost 7 years of marriage, and then add up the savings from my husband being able to handle whatever it was, I imagine the $ savings would be in the tens of thousands.

Not even remotely kidding.

Almost every car issue he has handled on his own, or with help from Dad or a friend. That includes tearing down engines, rebuilding transmissions, welding frames back together, thousands in body work, replacing oil and brake lines, headlights and all the ‘basic’ things like wheel bearings, front and back brakes, oil changes, tire rotations, and on and on and on.

He’s remodeled a 1400 sq ft. apartment, added a half bath on the third floor, added a laundry room on the second, taken out windows, opened and tore down walls, drywalled, insulated, rewired and replumbed everything, fixed roof leaks on that 3 story house. He’s torn apart furnaces and hot water tanks and saved me from birds (one in each bathroom project! (3!)).

Then he did it all over again on a 1400 sq ft single family house that included surprise mold remediation, framing every window and door as none had headers, redrawing the entire floorplan, adding a full bath upstairs, reworking a non-functional area to be a nice sized laundry/bathroom with double vanities and a custom-built shower, and building a custom kitchen with a gorgeous walk-in corner pantry.

That’s only a tiny fraction of all the things my husband has done. My man is amazing. And if your man is even half as amazing, he is going to save you SO. MUCH. MONEY.

It is good to be married to a handyman.

You will always have someone to ask for help

Ryan has told me “I don’t know”, maybe 3 times since I’ve known him, without taking some action to actually figure whatever it was out. He, among all the other things, is a researcher. He has taken initiative in every area of our lives. If he doesn’t know something, he researches it until he does.

When I wanted to sew something, HE FIGURED OUT THE SEWING MACHINE. And it was a little bit of a fight to get him away from it so I could try it. 😉 We ended up making three couch throw pillows, a wallet and a Bible bag for me. If he hadn’t been there figuring out the hard parts, helping me visualize what I was trying to accomplish, those things would still be piles of fabric and plush filling. 😛

Birth classes, deciding on a midwife and home birth, learning about farming and GMOs and corruption in the food industry, using a round brush to do my hair for a work Christmas party, or painting my toenails when I was 9 months pregnant and huge – nothing is out of the realm of something my husband is capable of.

I’ve met a lot of men who are delicate. Changing the oil, or a wheel bearing, crawling under a house to create plumbing where there is none is so far beyond something they would do they might as well not be on the same planet.

It’s so good to be married to a handyman.

He will most likely have multiple, world-changing, talents

My handyman is extra-ordinary in that he can also cook.

Yes, you read me right.

I know only a couple handymen that are better at something than my hubby (they can mud drywall more seamlessly, or they have more intricate craftsman skills), but my man can cook.

And I don’t mean he can throw a box of mac n’ cheese in a pot and cook it. (Although he can do that too). He knows how to make a roux (he taught me), a pie crust, the whole pie, his cinnamon rolls were some of the best, he puts together an amazing breakfast, grilling is a specialty, and his steaks are cooked to perfection. And he makes homemade, gourmet mac n’ cheese. 😉

That doesn’t mean I get to enjoy his food very often, as his life is full of all the other things, but when necessary he can feed us well. I absolutely adore being married to a handyman.

Some handymen are good with children, whether their own, nieces and nephews, or children at church. Others love to get deep in “women’s” work and can fold a mean basket of laundry, scrub toilets to sparkling, or speed through some of the nastiest, poopiest diapers with a smile. 😉 Whatever their specialty, it’s always good to be married to a handyman. 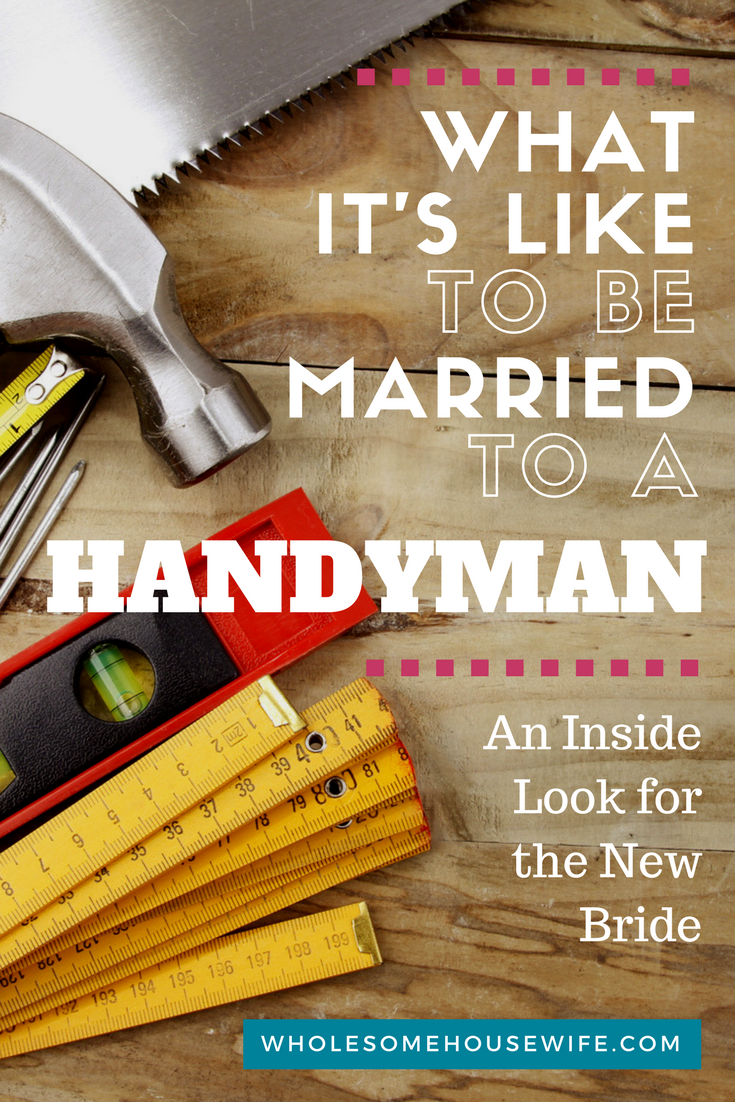 He is a hardworking, honorable man that people trust

We live in the area where my husband grew up. I have yet to meet one person from his past who has anything but good things to say about him.

On the other note, I’ve met 2 people who have hated him. Both times it was because he is an independent, intelligent, unable-to-control, slightly insensitive male.

Those kind of people seriously miss out on all the numerous blessings of being in the life of a handyman.

Being married to a handyman brings on a myriad of things, and is never short on blessings – unless you dwell on the negatives.

Discuss them though, you need to be on the same page. But, at the same time, make sure you pepper that manly man with much love, adoration and appreciation for all those crazy, amazing things he can and does do for your family.

I have never once found it anything short of the best thing in the world to be married to a handyman.

I would go so far as to say, find yourself one and don’t stop looking until you do. 😉

What say you about your handyman? What can he do?